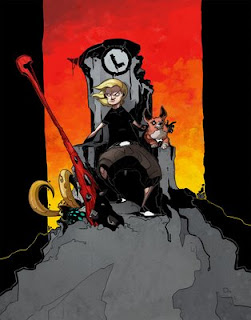 one day later! a new record for me!

a pass on color/texture, i could call it done, but i'm still going to go back and play with it a bit. i also took a lot of the colors into a very vibrant area for a change, that tends to be ground that i don't tread on very often.. high contrast, full black, full white, and colors aaaaall the way in the top right corner of the color picker.

-on a side note. don't see outlander, fuck it sucks.. when's there going to be a good viking movie :(
Posted by Unknown at 7:10 PM 3 comments: 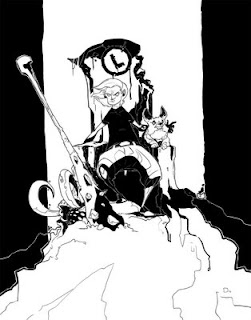 i haven't posted for a while, and it's been even longer since i've drawn anything >< i've got quite a long list of resolutions for the new year, and one of 'em is to rekindle my relationship with personal art; and not just pick up where i left off, i want to evolve and try some new things along the way. aside from a few freelance pieces i don't think i really drew up anything (traditional, digital or otherwise) since maybe june or july? really depressing when i think back on it, but i was busy as all hell with work, managing some episodes for an animated series and then working on cinematics for a couple games, so i supposes that's a decent enough excuse..

but excuses aside, as always, the fire seems to start back up with a self portrait. my artsy roommates and i are all getting our '2009' illustrations ready. you know, to use on myspace, facebook, etc.. though i've abandoned myspace and i don't have a facebook :P

i just finished up the 'inking' process and boy does it feel good to draw something again.. i've been veeeery inspired by mignola and wendling lately, and i've decided to try to push myself a bit more in their direction. hopefully this will be the beginning of a nice little journey. we'll see how it goes. this is also another first for me, i've finally put my now 9 month old corgi pup, 'harvington-reginald short stuff wallbanger', or just harvey, down on paper (digital paper that is). that's one big brick off my shoulders, how could i have not drawn my dog yet?! aaaaAAAAHHHHHaaa!!

colors to come soon, before the end of january at least. and maybe a few more things will peak over the horizon soon too.
Posted by Unknown at 8:05 PM No comments: